What is a Concha Bullosa

In reviewing your CT scan report, you may have come across this anatomical feature and wondered to yourself what it might be and how it might be related to your symptoms. Well, I am here to answer all that for you, and more.

First, we need to review some basic nasal anatomy. On each side of the nose are 3 turbinates: the inferior turbinate, the middle turbinate, and the superior turbinate. The turbinates’ main function is to humidify air as it passes through your nose before it reaches your lungs. In order to pack as much humidification power as possible into a small space, they’re shaped like little submarines, dangling in the middle of your nose. The middle turbinate is especially important because it is situated next to the drainage pathways for the maxillary, ethmoid, and frontal sinuses. 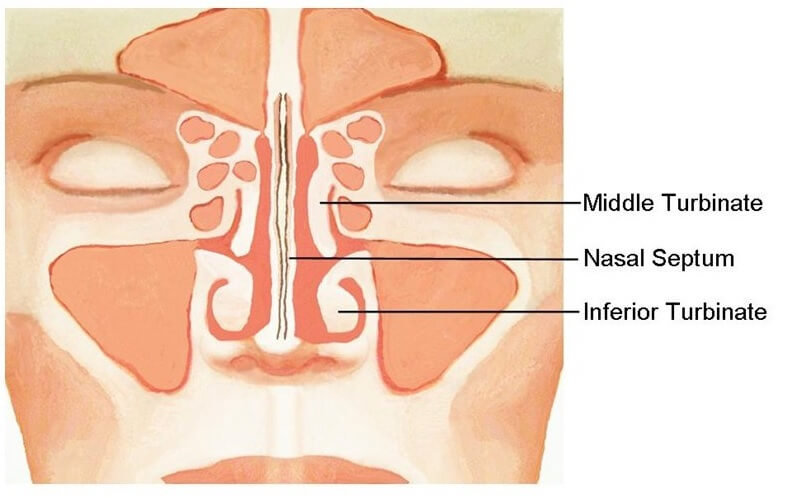 A concha bullosa is a middle turbinate that is pneumatized. In other words, there a large air pocket inside of it. When they get too big, they can obstruct the natural outflow tracts of the sinuses, resulting in recurrent or chronic sinusitis. One way we know this to be true is through population based studies. For example, researchers performed CT Scans on two groups of people – one with symptoms of sinusitis and another without. In the group without sinusitis, 23% of people had concha bullosas whereas in the group with sinusitis symptoms, 34% of people had it.[i] What this means is that having a concha bullosa doesn’t necessarily doom you to having sinusitis, but it certainly increases the chances of it. 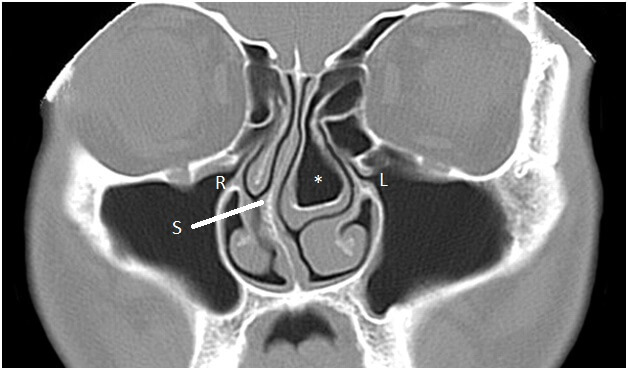 As you can see from the above CT, the concha bullosa inside the middle turbinate (denoted by *) takes up nearly all the space in the left nasal cavity. Not only is it causing narrowing of the left sided drainage pathways (L), but it’s actually causing the septum (S) to bow to the right, narrowing the right side as well!

Above is an endoscopic view of what a concha bullosa looks like – pretty ugly right? Again, you can see how it takes up nearly all the space in the nasal cavity.

Below is a link to a youtube video showing the technique used to remove concha bullosas. The video is courtesy of KL ENT.