Question from a reader regarding the PolypVac for nasal polyposis

“I’ve started to research the  PolypVac as an alternative to traditional surgery for the removal of nasal polyps. I’ve have had little results with spray steroids but greater success with orally taking prednisone tablets (10mgs.) to shrink the polyps. However, this has only provided temporary relief with re-occurrence after about 4-6 months.”

There are some real handy uses for this technology: I would consider employing it if the patient had a major reason for not being able to go under general anesthesia such as:

Below is a picture that shows the extent of polyp removal that is possible with traditional surgery versus the polypvac. The green outline shows where I can safely reach polyps in the office with a polyvac and the blue line shows what can be done in the operating room. 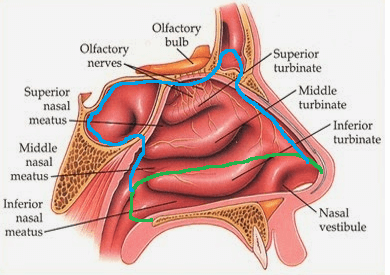